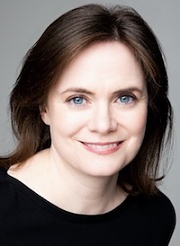 Alison trained at the Samuel Beckett Centre in Trinity College.

U.K. theatre includes: Ibsen’s The Lady From The Sea (Bolette) in a new version by Frank Mc Guinness directed by Hannah Eidinow and An Enemy Of The People (Mrs. Stockmann) in a new version by Rebecca Lenkiewicz directed by Mehmet Ergem both at the Arcola Theatre. Mutabilitie (Annas) by Frank McGuinness directed by Trevor Nunn and Night Of the Iguana(Charlotte) by Tennessee Williams directed by Richard Eyre at the National Theatre; A Woman of No Importance (Hester) directed by Marianne Elliot at the Manchester Royal Exchange, A Trip To Bountiful (Jessie May) at the Courtyard Theatre London and The Colleen Bawn (Colleen Bawn) directed by Garry Hynes also at the Manchester Royal Exchange. She worked for the RSC in London on The Hostage (Teresa) directed by Michael Bogdanov and in Edinburgh in The Gigli Concert (Mona) by Tom Murphy at the Assembly Rooms. Alison played Sarah in the Norman Conquests by Alan Ayckbourne at the Haymarket Theatre, Basingstoke and Laura in The Glass Menageriedirected by David Lan at the Watford Palace Theatre. For the Royal Court she played in the Young Writers Festival (Claire) directed by Ian Rickson.

Irish Theatre includes: For the Abbey Theatre: The Rivals (Julia) directed by Patrick Mason, the premier of Tom Murphy’s version of The Cherry Orchard (Varya), The Importance of Being Earnest (Gwendolyn), The Colleen Bawn (Anne Chute) for which she was nominated again the IT Best Supporting Actress category, the premier of Tom Kilroy’s version of Six Characters in Search of an Author (Stepdaughter), the premier of Tom Murphy’s She Stoops To Folly (Olivia), Moses Rock (Joan) and The Misogynist (Chorus). Alison played Jessica in Terry Johnson’s play Hysteriafor b*spoke theatre company and was nominated for Best Actress. She recently appeared in Frank McGuinness’ adaptation of The Dead by James Joyce, directed by Joe Dowling.
For the Gate theatre, Dublin she has appeared in the Irish premiers of the adaptations of Jane Eyre (Adele) by Fay Weldon, Pride and Prejudice(Lydia) by James Maxwell and Hugh Leonard’s version of Great Expectations (Estella). She played Claire in Brian Friel’s Aristocrats at the Gate and on tour at the Lincoln Festival, New York.

Alison’s TV and Film work includes: The Bill (ITV), Fair City (8eps) RTE, The Cassidys (6eps) RTE/ Graph, Bossanova Blues (RCA), The Sign of The Fish(Setanta Films), The American (BBC Films), The Ambassador (6eps) Ecosse/BBC, Casualty (BBC), Pie In the Sky (10eps), Now I Know, Three Wishes For Jamie (HTV), A Summers Ghost (C4) and most recently Do You Know Who I Am? directed by Iris Park for Idir Films.

For radio she has recorded the 2011 series of Poetry Please for BBC Radio 4 as well as The Road Wife, The Night Manager and Haunting Women by Dermot Bolger for Women’s Hour. For RTE Radio she has recorded A Midsummer’s Nights Dream, Loonies, The Funeral, An Evening With Blessed Breda, The Importance of Being Earnest and A Little Mice Music. In addition Alison records audio books (Anne Enright’s The Gathering and Roddy Doyle’s Paula Spencer for RNIB) and does voiceovers.

Alison co-founded b*spoke theatre company in 2002 with Jane Brennan. Their productions include: Electra in a version by Frank Mc Guinness, the premier of The Drunkard by Tom Murphy after WH Smith & A Gentleman, Boston Marriage by David Mamet, Family Stories by Biljana Shriblanovic, Hysteria by Terry Johnson, Tejas Verdes by Fermín Cabal, Honour by Joanna Murray Smith, Benefactors by Michael Frayn and The Sanctuary Lamp by Tom Murphy.