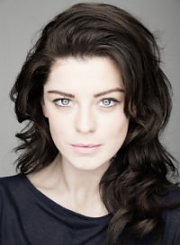 In 2016, Aoibhinn appeared in the recurring role of Mary, in the hit Cinemax/HBO series Quarry starring Logan Marshall-Green and Peter Mullan. She played Crystal in 2017’s Paula, a three-part TV drama written by Conor McPherson and directed by Alex Holmes for the BBC and RTE. In 2018, she appeared as Willa in the 2018 Syfy/Netflix show Nightflyers in Ireland.

Aoibhinn appeared in the critically acclaimed Trial of the Century directed by Maurice Sweeney for TV3 and in a leading role in the film Poison Pen written by Eoin Colfer (creator of the Artemis Fowl series of novels). She has appeared in film festivals in the short films Groundless, Goodbye, Darling and Looks Like Rain.

Originally from Monaghan, Aoibhinn graduated with a degree in Theatre Dance from the London Studio Centre. Other recent screen work includes playing the role of Rita in Jimi: All Is By My Side, a Jimi Hendrix biopic directed by John Ridley and starring Hayley Atwell and Imogen Poots, Romantic Road for RTL TV and she appeared in BBC Drama’s 2014 series Quirke opposite Gabriel Byrne in 2014.

Aoibhinn is still well known for her appearance in the series regular role of Trish in Love/Hate for all five seasons of the multi-award winning show, directed by David Caffrey, written by Stuart Carolan and produced by Octagon for RTE and which now airs on Channel 5 in the UK.

Her other screen work includes Resistance (RTÉ), Reema in Wild Decembers directed by Anthony Byrne for Touchpaper TV/RTE and the series regular role of Tara in two seasons of Trivia, a new comedy drama for Grand Pictures/RTE which was nominated for several awards at the Monte Carlo TV Festival 2011. Aoibhinn also appeared in the independent feature Seven Songs for Amy which appeared at the Galway Film Fleadh 2012, Talk It Out with Mark Doherty as part of the Storyland project for RTE and in Chasing Leprechauns for the Hallmark Channel. Aoibhinn appeared as Bernadette in season two of Moone Boy (SKY) opposite Chris O’Dowd in 2014.

On stage Aoibhinn appeared as Jovie in Elf: The Musical, produced by London Management Ltd/Michael Rose. Aoibhinn appeared in an acclaimed performance as Erica in Between Foxrock and a Hard Place, directed by Jimmy Fay, written by Paul Howard and appearing at the Olympia Theatre and in the sell out remount of the same show at the Gaiety Theatre, Dublin in 2011. She appeared in Alice in Funderland in 2012 directed by Wayne Jordan at the Abbey theatre Dublin, in Anglo; The Musical at the Olympia Theatre, Dublin in 2013 and Threepenny Opera, directed by Wayne Jordan at the Gate Theatre. Other recent theatre appearances include Corn Exchange’s production of Misfits directed by Annie Ryan as part of The Dublin Theatre Festival.