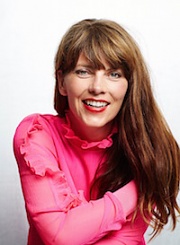 Lark Winther is a Danish actress, graduated from The Arts Educational School, London 1996-1999.

Lark Winther had her debut in famous director Hella Joofs Danish feature “Shake It All About” as the young Sandy, with a line that has been Danish culture histoiry. Lark has since collaborated with Hella Joof among all in the movie Oh Happy Day, Danish National Television, DR1 TV series Album and her own comedy series Normalerweize which she wrote and starred in with actress Anna Neye Poulsen. The series was first broadcast on Danish National Televsion, DR2 in 2004, and later for several seasons, while the girls made it live in Bellevue Theater in 2009.

Lark has a great comedic talent and also great experience in dramatic roles in movies and on TV. The most prominent is her starring role in The Blessing in which she played the lead as a new mother with postpartum depression. The film was shown at several international festivals, and even received Lark the Bodil Academy Award nomination for her performance. Last year starred Lark in three movies, People are eaten, a children’s cult film Antboy (which is being remade right now in Hollywood) and starred in My Sister’s Children feature film series.

However, Lark also made many outstanding roles on TV, including DR1’s Better Times, Park Road, the Emmy nominees youth series Mille, Bankruptcy and permanent roles in TV2 series Those Who Kill and DICTE in three seasons.

Having just completed filming the satire series While we squeeze the lemon, Section 1-5 to DR2. As well as a lead in the feature film 3 things which is coming out May 2017, alongside Nicolai Coster-Waldau.