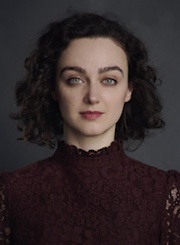 Mary trained at the Guildhall School of Music and Drama (2017 grad, Josephine Hart Scholar), prior to which she studied at Cambridge.

Mary also writes and makes her own work: her one-woman show Magdalene is currently being developed through a residency at the Battersea Arts Centre. She is very musical – a strong classically trained singer – with a good ear for accents.