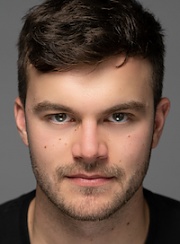 Charlie can currently be seen in the ITV series Professor T on Britbox, directed by Dries Vos.

During his three years of training, Charlie played various roles in productions, including ‘Andrey’ in Chekhov’s Three Sisters, ‘Leontes’ in Shakespeares The Winters Tale, ‘Dan’ in Closer, ‘Garden Boy’ in Home and many more. He has gained lots of experience working with both classical and contemporary text.

Before studying, Charlie took his own devised show Kindred to the 2013 Edinburgh Fringe festival where it was awarded 4 star reviews. He also appeared in The Webby award winning short film The Birch.

Charlie is an extremely versatile young actor and highly skilled in accents and sports.