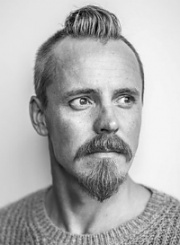 Jasper is one of Finland’s best loved and most talented actors. He first came to international attention for his performance in the comedy, Lapland Odyssey, but it was his role in Heart of a Lion that won him widespread acclaim and a Jussi Award in 2014. It also led to him being cast as ‘Halfdan The Black’ in the international TV series, Vikings. Prior to this, he filmed Jet Trash opposite Robert Sheehan. Jasper starred as ‘Felix Kendrickson’ in Spike Lee’s critically acclaimed and Oscar-winning film Blackkklansman alongside Adam Driver, which won the Grand Prix at Cannes Film Festival. This year, he has teamed up again with Lee for the feature film drama Da 5 Bloods, and recently completed filming on Amazon Studio’s new adaptation of The Dark Tower, in which he plays a leading role.

Jasper comes from a family of actors and began acting in the Finnish National Theatre and the Helsinki City Theatre when he was a child. At the age of 20, following his studies at The Kallio Secondary School of Performing Arts, he became part of the original cast of a daily soap, which became a huge success.
At the age of 20, he was selected to play the main role in BAD BOYS, directed by the talented Aleksi Mäkelä, which became the biggest box-office hit ever in Finland. For his performance in this film, Jasper received the prize for “Best Actor” at the Brussels Film Festival in 2003. Roles in VARES and ADDICTION – WHEN NOTHING IS ENOUGH quickly followed. The film, FROZEN LAND, won many international awards including the Jury Prize in Moscow, the Nordic Award at the Gothenburg Festival and the Golden Owl at the Leeds Festival. Jasper’s creative collaboration with director Aleksi Mäkelä has proved fruitful – in 2005, he starred in MATTI – HELL IS FOR HEROES, and was cast in V2.

AWARDS:
2006: Named as one of European films’ Shooting Stars by European Film Promotion.